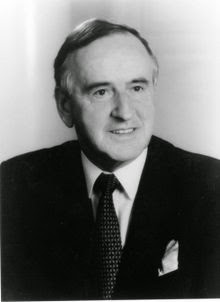 I wish to pay tribute to the memory of Albert Reynolds, former Taoiseach, who died this Thursday morning. I was deeply saddened by the news.

As a person, he was warm and kind, including to political opponents.
He worked long hours and was accessible.
He was multi talented, being a success in politics, the food industry and in the entertainment world.
He will be missed greatly by his family, friends and political associates. I extend heartfelt sympathy to Kathleen and  all his children.
Albert Reynolds played a vital role in ending the violence in and around Northern Ireland that caused so much suffering to so many people from 1969 to  1997. His particular contribution was negotiation of the Downing Street Declaration of December 1993 which offered a path to political participation to all political forces in Northern Ireland.
In my view, four aspect of the Declaration were particularly important
1.The statement that “problems could only be solved by peaceful and democratic means”
2. The redefinition of Irish self determination as requiring consent from both parts of Ireland.
3. The passage in the declaration where , as Taoiseach, Albert Reynolds asked the people of Northern Ireland to   “  look on the on the people of the Republic as friends”  and committed himself to take steps to that end. This obligation bound his successors.
4. Paragraph 10 which said
10. The British and Irish Governments reiterate that the achievement of peace must involve a permanent end to the use of, or support for, paramilitary violence. They confirm that, in these circumstances, democratically mandated parties which establish a commitment to exclusively peaceful methods and which have shown that they abide by the democratic process, are free to participate fully in democratic politics and to join in dialogue in due course between the Governments and the political parties on the way ahead.
Full participation in the political process was linked to a “permanent end to the use of and support for paramilitary violence”. This was crucial, but initially difficult to verify.
These elements of the Declaration helped redefine Irish politics, the relations between the communities in Ireland, between North and South and  between Britain and Ireland.
Statement by John Brutom, former Taoiseach.
Print Entry