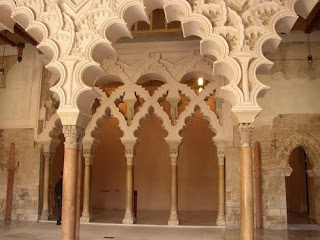 Finola and I have just returned from a short break in Spain. We stayed near Nerja on the coast of Andalucia.

We took the opportunity to visit Granada, and its magnificent Alhambra palace. This beautifully preserved remnant of Muslim Spain is worth seeing. The journey across the Sierra del Chaparral to get from the coast to Granada was a chance to experience some of the peninsula’s dramatic scenery.

Much debate is raging in Europe now as to whether to taxpayers of the other euro area countries should provide a stand by credit of some kind to Greece to help it through its present budgetary difficulties. When the euro was initiated a provision was made for a “no bail out” rule. Now it is argued that, to get around this rule, the individual member states should provide the help to Greece, rather than the EU as such. It is also argued , for example by Wolfgang Munchau in the Financial Times, that if the IMF were to be brought in to provide a financial back for Greece that this would send out “a disastrous signal” about where the euro was headed. Instead he argued up that the euro countries should set up its own anti crisis plan to deal with the problem of countries like Greece, a sort of local IMF.

I have to say I am not convinced by these arguments. Markets look for predictability. The EU should try to act within predictable rules. The EU Treaties do not authorise what is being proposed and no case for such measures was made in the Convention when the Lisbon Treaty was being put together. The member states of the euro are all individual members of the IMF and are contributors to its funds. Those contributions give them rights and responsibilities. They were not asked or expected to give these up when they joined the euro. It is hard to argue that only the IMF members who a part of a currency union should not avail of IMF facilities ,just because they are members of a currency union, and that they should instead rely on the other members of the currency union. There is no such stipulation in the rules of either the IMF or the euro.

Perhaps if all else has failed, and the IMF is not up to the job, there might be a responsibility on the shoulders of other member states. Improvisation is sometimes necessary in politics. But it should not be the first, or the only, option

The greatest of all englishmen