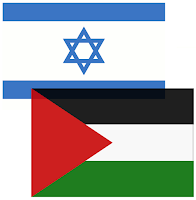 The preferred solution of the international community for the dispute between Israelis and Palestinians is two states, one Israeli and one Palestinian existing side by side , with international guarantees. One of these states, the Palestinian , would be demilitarized while the other, Israel , would presumably remain a fully armed nuclear power.

In fact the rate of Israeli population increase in this 22% (the occupied territories) is much faster than the rate of population growth among Israelis in the 78% of mandate Palestine that makes up Israel proper.

One does not have to be a brilliant mathematician to work out that if this trend of extra Israeli settlement in the 22% of the land left for Palestinians continues, a two state solution will become physically and geographically impossible. There would be no manageable space left in which to found a Palestinian state. Little islands Palestinian land, cut off from one another by Israeli roads, settlements and security barriers, would not leave the Palestinians with a territory over which they could realistically be expected to establish a state that would be effectively sovereign and capable of taking on the responsibilities of control over its own territory that sovereignty implies.

President Obama asked the Israeli Government to stop settlement building in the Palestinian territories. Israel has declined to do so. There have been no consequences for Israel of this refusal.

The United States continues to buy arms from Israel. Israel remains the largest per capita recipient of US foreign aid, although it is a prosperous country. Americans can claim tax relief on financial contributions they make to Israeli settlement activity, even though their President has asked that it should stop. The US continues to buy arms from Israeli manufacturers.

My belief is that a perception of inequitable treatment of Palestinians has an effect on attitudes towards the West in countries with large Muslim populations. I also believe that it has contributed indirectly to the decline in the Christian populations in Middle Eastern countries. It assists creating a climate of opinion among Muslims that helps the recruitment to terrorist organisations.

The Civil Rights movement in the United States initially focussed on the equal right to vote. So also did that in Northern Ireland. Palestinians living in the West bank have no right to vote on the composition of the government that ,in reality, controls their lives, the Israeli Government. While that situation can be sustained militarily, it cannot be sustained politically. The indefinite continuance of this situation puts supporters of Israel , who believe in democracy for all, in a false position. That is not wise from an Israeli point of view.

Serious pursuit of a two state solution would resolve that contradiction, so long as what is to be created is a genuinely sovereign Palestinian state. I doubt whether the pursuit of a two state solution will be seen as serious as long as Israeli settlement activity, in the 22% of the territory that might become the territory of a Palestinian state, continues without any negative consequences for Israel. I do not know how long this can continue, perhaps a long time, but the ultimate result will be tragic for all.

Divided Societies-How will they survive the Recession?