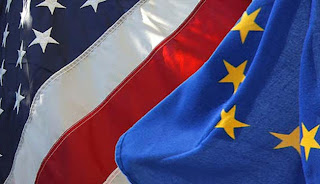 I had a meeting this week in Dublin with the members of the Transatlantic Legislators Dialogue (TLD).
This body brings together members of the United States House of Representatives, and members of the European Parliament for regular discussions. In many respects, these are the two most powerful legislative bodies in the world. So their  cooperation is  a vital global interest.
When I was EU Ambassador in Washington, I had a great deal of involvement with TLD and attended many of their meetings.
One of the big topics for the TLD was the possibility of a comprehensive Trade and investment Partnership (TTIP) being negotiated between the European Union and the United States.
If such a deal could be agreed it would cover over half of all the economic activity in the world. It would be a boost to the economy because it would remove barriers and inefficiencies that prevent Europeans and Americans realising their full economic potential.
Even without an agreement, investment across the Atlantic supports 7 million jobs. For example, 70% of all foreign investment in the US comes from Europe, and US firms have more investment in Ireland that they have in China! Californian firms export twice as much to Europe as they do to China.
Among the barriers that might be swept away by a TTIP  are

+ Tariffs on good exports, that average 3%.  Eliminating these tariffs could boost exports in both directions by 7%
+ Unnecessarily complex and duplicative customs formalities
+ Restrictions on European involvement in the provision of passenger air transport inside the United States, which means Americans pay unduly high air fares
+ Similar restrictions on European involvement in Shipping between US ports, which add to the price of goods
+ Restrictions on the provisions of services in one another’s markets in fields like insurance, education, computer services and logistics
+ Restrictions on the supply of goods and services to governments on both sides of the Atlantic, which mean that taxpayers pay more taxes  than they would if their governments could buy from the least expensive supplier regardless of nationality
+ Insufficient cooperation in combating counterfeiting, and theft of copyright and  of intellectual property
+ Non tariff barriers, and duplication of tests, that arise from having different standards, and different testing procedures, for electrical goods, pharmaceuticals, chemicals and other products
+ Restrictions on the sale of food products across the Atlantic, because of protective tariffs, and differently applied food safety standards

All these restrictions involve  potential misallocation of resources, and  waste or sub optimal use of time, talent, and material. Removing these restrictions could add 70 billion euros to the world economy.
The negotiation of this agreement will not be easy.
It would have been better if a new comprehensive global trade and investment deal could have been made through the World Trade Organisation (WTO), because it would have been open to every country in the world, and the WTO has a well established system for settling disputes. A transatlantic deal may lack that.
But the WTO talks collapsed so this is the best available option.
It is also urgent for Europe because the United States is negotiating a trans Pacific deal, which might diminish Europe’s relative position.
Among the leading figures who took part in the meeting were US Congress members,Mario Diaz Balart, Henry Cuellar, Michael Turner and Bill Keating.
On the European side, the delegation was led by Christian Ehler MEP and Elmar Brok MEP. Also included were former Commissiomer, Danuta Huebner MEP, Sarah Ludford MEP and Sean Kelly MEP.
Print Entry

IS IRELAND A TAX HAVEN?

SYRIA , SOMALIA, TRADE ROUTES AND ENERGY—-WHAT ARE EUROPE’S VITAL INTERESTS, AND HOW CAN IT BEST PROTECT THEM?