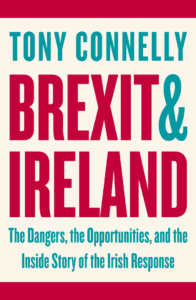 “Brexit and Ireland, The dangers, the opportunities and the Inside Story of the Irish response”

with an apt quotation from the recently deceased American novelist, James Salter, describing a passenger leaving home on a liner pulling away from the quay:

“ a fatal space has opened, like that between a liner and the dock, which is suddenly too wide to leap; everything is still present, visible, but it cannot be regained”.

In 2017, the UK has decided to leave, but is still fully in the EU. We are living the past, but it is over.

Tony Connelly’s book thoroughly explores all the possible consequences of Brexit, with particular reference to Ireland.

These will, in some measure, affect every country in the EU. The book deserves to be read in every one of the 28 EU capitals and by everyone whose livelihood depends on trade relations with the EU or the UK. But the effects of Brexit will, of course, be most intensely felt in Ireland.

Geography matters. After Brexit, Ireland will be geographically isolated from the rest of the EU.

Ireland has to export 90% of the food it produces, and 43% of that food goes to the UK. Meanwhile, Ireland imports virtually all its energy via pipelines and cables coming through or from the UK. As Connelly puts it, Ireland feeds Britain during the day, while Britain keeps Ireland warm at night!

All this interdependence would not be possible without agreed standards, and agreed systems for enforcing and adjudicating upon, those standards. These all emanate from the EU and the European Court of Justice (ECJ). The same applies to cross border arrangements for chemicals, aviation, the sale of television programmes, and even transporting horses to and from race meetings.

Once the UK “takes back control” from the EU, and rejects a common adjudication system under the ECJ, the basis of this profitable, and uniquely convenient, mutual traffic between the UK and Ireland, will erode.

Tony Connelly examines how this process will affect every part o the Irish economy, from medical device makers whose UK suppliers will no longer be EU certified, to the mushroom exporters whose perishable products could ace fatal delays getting to UK supermarkets in time.

This book is particularly good in describing the effect of Brexit on the dairy and beef sectors.

It is no mere desk exercise. The author has spoken directly to those involved in each sector. Half the “at risk” jobs in the food sector are in parts of Ireland where incomes are well below the EU average, even though Ireland itself is above that average. In Ireland, the effects of Brexit will aggravate existing inequalities.

Outside the food sector, there is more room to adjust. Connelly cites the example of a Wicklow software business which has been able to reduce its export dependence on the UK market from 70%, to a mere 15%…in just one year.

Meanwhile, based on numerous interviews, he traces the reaction of the Irish government to Brexit.

Initially, there was a focus on discussions with the British, but it soon became clear that there was a limit to the usefulness of this.

The UK did not have a plan.

The collective mind of the UK Civil service did not fully grasp the relationship between the Good Friday Agreement and membership of the EU Single Market by both Ireland and the UK.

This gulf, between the agreed Tory rhetoric about Brexit, and the realities on the island of Ireland was worsened by UK General Election called by Theresa May. Virtually all the MPs, elected by Northern Irish constituencies, either refused to take their seats or are now committed to a deal to support the Tory government on all Brexit issues. Although legally still part of the UK, Northern Ireland has no effective voice or vote, in Westminster, on the Brexit legislation.

The Irish government has inevitably turned to its fellow EU member states, and to the European Commission, to find a way to mitigate the damage of Brexit.

Connelly describes the intense contact between every Irish interest group and the Barnier negotiating team. Barnier understands the Irish issues thoroughly. But that does not mean he can provide reassuring answers.

This is because, as Tony Connelly puts it,

“Everything about the reality, from the EU’s non negotiable Customs Code, to Britain’s determination to do trade deals around the globe, to the phyto sanitary (disease control) requirements, all scream “hard border”.

According to Theresa May, It remains “overwhelmingly and compellingly” in Britain’s interest that the EU succeed.

But the EU is a voluntary Union, and it can only continue to exist if there is willing implementation of agreed rules. As this book shows, the UK Brexit policy is testing that, in a reckless way.

I am convinced that the only way to avoid a really hard Brexit is for the time for the negotiation under Article 50 to be increased from 2 to 6 years.

Yesterday in Parliament, the UK Prime Minister said that a transition period only made sense if there was an agreed concept of what one was transitioning towards. It is impossible for an agreement to be reached on that concept in the next twelve month, especially as there is no agreement within the UK government on what they are looking for! Her statement evoked surprise on the part of people who should have known better.

It was fundamentally reckless of the UK Government to write its legally binding Article 50 letter, without having first agreed within itself on the outline of a viable deal for the UK, that would enable to EU to maintain the integrity of the EU Single Market.

Instead, the UK wrote the letter, and then proceeded to rule out all the viable options that might achieve this, like the Norway model, or the UK remaining in the Customs Union. All ruled out without proper examination or public debate. Meanwhile, studies that the UK Government itself has done on the impact of Brexit on individual sectors of the UK economy are being concealed from the public.

This recklessness of the UK Government will inflict immense collateral damage on Ireland, as Tony Connelly’s book shows in painful detail.