A POSSIBLE KINGDOM OF SCOTLAND, A REPUBLIC OF FLANDERS, AND A REPUBLIC OF CATALONIA— WHAT CHANCE WOULD THEY HAVE OF STAYING IN THE EUROPEAN UNION? 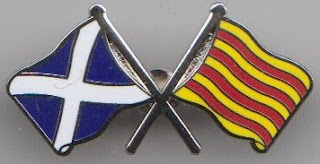 On the same day that the UK Prime Minister, David Cameron signed an agreement with the Scottish  First Minister Alec Salmond  on the terms of a referendum on Scottish  independence, in which they will be on opposite sides, a party that favours the breakup of the Belgian Kingdom won a resounding victory in local election in Flanders.

Meanwhile, in Spain, a party in power in Barcelona that favours Catalonia ultimately becoming completely independent, has called a general election.  It is unhappy that the beleaguered  Government in Madrid, that has plenty of other problems on its plate, will not give Catalonia  the  right to raise and spend its own taxes.
If the pro independence party wins the Catalan General Election, it will press for measures eventually leading, either to complete Catalan independence, or to a total clash with the  Government in Madrid. Spain’s central Government takes a firm line against all secessionism anywhere, because it could  create precedent that might lead to the decomposition of the entire country.
In Belgium, the biggest city in the country, Antwerp, will have a new Mayor, Bart de Wever, who is the leader of a party which favours the establishment, by peaceful means, of a Republic of Flanders, splitting the Kingdom of Belgium.
He obtained almost 38% of the vote in Antwerp, and another pro independence party, the Vlaams Bloc, got a further 10%. Mr de Wever’s party obtained strong support in other parts of Flanders, especially in the east, but not as much as it got in Belgium’s biggest city.
This raises really difficult issues for the European Union.
If an area were to secede from an existing EU member, that area would thereby cease to be a member of the EU.
It would have to apply anew to become an EU member state, as if it had never been a member of the EU, and was applying for the first time.
A state can only be admitted to the EU, only if ALL existing members agree. The more countries there are in the EU, the harder it becomes to achieve unanimity of all states. Turkey’s case illustrates the problem well, so does General de Gaulle’s veto of UK membership of the Common Market in the 1960’s.
Some countries have a rooted objection, on principle, to any splitting of existing countries, often because they do not want to set a precedent that might encourage the secession of parts of their own countries.
For instance, on the basis of this principle, a number of EU countries -Spain, Romania, Slovakia and Greece- have refused to recognise the secession of Kosovo from Serbia, and refuse to have anything to do with the new state of Kosovo.
Let us suppose that either  Scotland, Catalonia, or Flanders succeed in becoming independent, and want to stay in the EU, they will have to apply to join, and will not be readmitted  to the EU unless Spain, Romania, Slovakia, and Greece all agree, and overcome their current objections of principle, to secessions.
Meanwhile, as if things were not complicated enough, the Conservative component of the UK Government is contemplating a renegotiation of the terms of UK membership of the EU, and then holding a referendum on the  result.
This raises the obvious  question, now that the Conservative UK Prime Minister has accepted in principle the right of Scotland to make  an independent sovereign decision,of what would happen if , in the referendum, Scotland  favoured staying in the EU, while the rest of the UK voted to leave, or vice versa?
Europe is facing an economic crisis. This crisis is causing stress in the vicinity of long buried fault lines. The blame game is in full swing. But none of this stress, and none of this blame, solves the economic crisis for families throughout Europe.
The European Union’s political system makes some decisions by majority vote, but, because it is a union of sovereign states, it has to make many decisions by unanimous agreement. This is already causing a lot of problems in dealing sufficiently speedily with the economic, banking, and fiscal crises that now afflict us.
However difficult this may be to accept in Scotland, Flanders or Catalonia, it might be wiser to agree to sort out the economic crisis first, and deal with issues of separation, and or of rearranging national boundaries, later.
But that is not an easy proposition to sell to an impatient and proud public opinion, as John Redmond, who faced the same dilemma in Ireland in 1914, could tell us, if he were alive.
Print Entry

THE EUROPEAN UNION NEEDS TO BECOME MORE DEMOCRATIC, IF THE PEOPLE ARE TO GIVE SUSTAINED BACKING TO GREATER INTEGRATION.