A NEW LOOK AT AN OLD WAR

In “Battles for the Three Kingdoms:, John Barratt 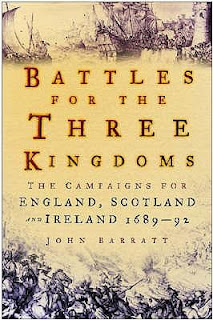 I have just read  “Battles for the Three Kingdoms, the campaigns for England, Scotland and Ireland 1689 – 92” by John Barratt , published by Sutton publishing.
For an Irish reader, this book is enlightening, because it shows how the famous battles in Ireland, like the siege of Derry (1689),the battle of the Boyne(1690), the sieges of Limerick(1690 and 1691) and the battle of Aughrim (1691) were part of a much wider war, that was waged both at sea between the French and Anglo Dutch navies,  and in Scotland  between Jacobite and Williamite armies .
In fact the last Jacobite stronghold on these islands to fall was in Scotland, at Bass Rock in the Firth of Forth, which did not surrender until June 1694, long after organised resistance had ceased in Ireland. Other parts of the conflict in Scotland were the battles of Dunkeld, of  Killiecrankie,  and of  Cromdale, and  the massacre at Glencoe .
After the war in Ireland ended with the  fall of Limerick in October 1691, a large Irish Jacobite army of 14000 men was assembled in Normandy in 1692, with a view to invading England, and might have done so, if the French Navy was not overwhelmed by the Anglo Dutch fleet in naval battles at Barfleur and la Hogue.
Irish students will know of some of the leading participants on the Jacobite side, like King James himself,  the French General St. Ruth, who fell at Aughrim,  and, of course,  Patrick Sarsfield, the Earl of Lucan.
But they will know little of other Jacobite leaders, who are brought to life in this book, like

+  the MacCarthy Mor, who unsuccessfully defended Carrickfergus, + Richard Hamilton, who almost persuaded the defenders of Derry to surrender,  +  the Latvian, Von Rosen, who took a harder  and ultimately less successful line with the defenders of Derry, + Justin McCarthy,who lost the battle of Newtownbutler in 1689, + Balldearg O Donnell, who led an irregular force in North Connacht to the end of the war +  Roger McElligott, who  unwisely tried to hold Cork in 1690 against Marlborough, when he would have been better able to resist in Kinsale +  Colonel Bourke, who resolutely defended the fort at Ballymore, Co Westmeath in 1691 and  + King James’ own natural son , James FitzJames , the Duke of Berwick, who, like Sarsfield , went on to have a military  career in the French  army.

While the military judgement of King James does not come very well out of this book, it is fair to point out that his French military advisors did not even want him to fight at the Boyne at all, but to burn Dublin and retreat across the Shannon.
James felt, probably rightly, that his army would have disintegrated if he did not make a stand, although outnumbered and trying to hold a poor position.
Similar considerations arose a year later at Aughrim.  Sarsfield did not want St Ruth to stand and fight there, and favoured concentrating on the defence of Limerick and Galway instead, and thereby keeping the army intact. But St Ruth was worried about the effect on morale of taking such a course.
The author concludes that, at the battle of Aughrim,” the fighting qualities of the Irish troops had come within a measurable distance of pulling off a surprise victory”.
Political attitudes of the time were very different to the interpretations placed on them by subsequent nationalist historians.
The author says Irish Jacobites were fitted out in red uniforms, to emphasise that they were the legitimate army of the United Kingdom, fighting for the legitimate King, against the usurper Willliam of Orange.
When, in 1692, the French tried to get Irish soldiers in France to wear the French grey uniforms, the mutinied “until at length they were given red coats like those they had worn throughout their careers in Ireland”, the author writes.
Print Entry

WHO ARE THE REAL WINNERS FROM COMPLEX FINANCIAL REGULATIONS?