A MISCAST CHARACTER, OR A WAR CRIMINAL?

In “The Last Kaiser, German Emperor, Giles MacDonogh, the life of Wilhelm II” 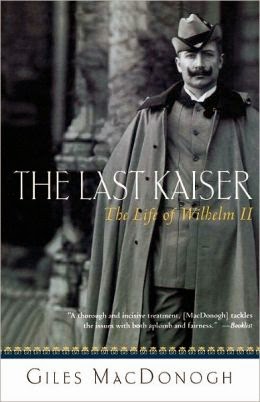 I bought “The Last Kaiser, the life of Wilhelm II” by Giles MacDonogh in the second Storey bookshop in Washington on a recent visit there.
In the aftermath of the First World War there was a big agitation in Britain and other Allied countries to have the Kaiser hanged because of his, and Germany’s, guilt  in starting that  War.
The Versailles Treat of 1919 attributed all the responsibility for the War to the German and Austro Hungarian Empires (who incidentally were  “gallant allies” of the leaders of the 1916 rebellion in Dublin, according to the Proclamation issued by its leaders).
It is lazy to take a relativist view and say that all participant nations were more or less equally to blame for the war, and equally lazy  to argue that an anonymous militarist “system” was to blame.
Those approaches deny all personal responsibility, and are of little help in finding ways to avoid future wars.
The Kaiser certainly made many warlike statements in the pre war years, and for these he must be held responsible. They conditioned and incited public opinion in dangerous ways
But McDonogh concludes that “the German Emperor was capable of saying one thing at one moment, and the reverse the next. When speaking at least, he always fired before he took aim “.
Unfortunately his words may have encouraged others to set a course towards war, which he did not intend, but was too weak or too late to reverse.
A contemporary said he was a man of ”brilliant but unstable intellect”  who found himself by birth destined for an occupation for which he was temperamentally ill suited.
Believing in the monarchical principle, he overestimated his personal capacity to control events. In practice he was willing to compromise, but this was made more difficult for him both by his own past statements, and by the machinations of some of the people around him.
This book describes his unhappy childhood, as the eldest son of Queen Victoria’s daughter and of the German Crown Prince.
His mother, who favoured an Anglo German Alliance, was distant towards him and he reacted against this by initially favouring German Naval rivalry with Britain.
At other times he tried to enhance Germany’s security, by supplementing Germany’s well established  alliance with Austro Hungary, with alliances with both Britain and Russia.
He hoped his close blood relationship with the British King and the Tsar would overcome the divergences of the strategic interests. These efforts came to nothing, because Britain was tied to France, and Russia was an intense rival of Austro Hungary.
The book gives a very interesting account of his abdication in November 1918, his  grant of asylum  by the Dutch Queen , and his life in retirement in the Netherlands up to his death in 1941(when the Netherlands had come under Nazi occupation) .
Print Entry