A BIOGRAPHY OF A ROMANTIC EXPONENT OF VIOLENT NATIONALISM 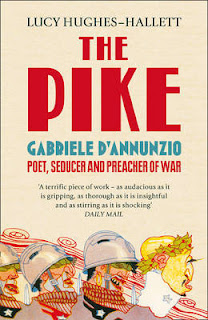 Ernest Hemingway, a contemporary of Gabriele D’Annunzio, described the Italian Nationalist agitator of the early 20th century as a “jerk”,  because of D’Annunzio’s glorification of war.
D’Annunzio believed at the time that a recently united  Italy needed to shed blood, and  to conquer extra territory, so as to build a  shared sense of nationality among its diverse peoples.
Lucy Hughes Hallet has produced a major biography of D’Annunzio, entitled “The Pike, Gabriele D’Annunzio, Poet , Seducer and Preacher of War”. The book won the Samuel Johnson prize for biography in 2013.
As Ireland prepares to commemorate, between 2016 and 2022, the centenary of events set in train by a similar exercise in nation building through violence and death, it is well to reflect on the effect of a similar ideology in another country.
Like many of Ireland’s 1916 rebels, D’Annunzio was a poet, and a dramatist.
In 1915, he used his huge reputation in these fields, and his gift of speechmaking, to agitate for Italian entry to the First World War. As Hughes Hallet puts it
“ He looked forward to the ensuing carnage without compunction for his part in involving his country in it. He referred blasphemously to his days of non stop oratory (in favour of war) as his “Passion Week””.
His speeches were incantatory, designed to work, not on their hearers intellects, but on their emotions.
That a dramatist would have such influence may be surprising, but it seems that in 1870, it is estimated that, while only 25% of Italians could read, 90% went to the theatre.
His theatrical approach to politics, was adopted with some success by Mussolini, and later by Hitler.
Although, in the war, Italy suffered enormous casualties in its battles against the Austrians, was militarily humiliated, and achieved little, D’Annunzio remained hugely popular after it ended, and was able, with impunity, to defy his own government, and to successfully  incite Italian troops to mutiny in pursuit of territorial claims against Yugoslavia.
He was the precursor of Fascism, and interesting in this respect, but one wonders if  he really deserves a biography of 644 pages!
Print Entry

LETTER TO EU HEADS OF GOVERNMENT