A BATTLE FOR MEMORY…..NAPOLEON VS WELLINGTON

In “Napoleon and Wellington “, Andrew Roberts 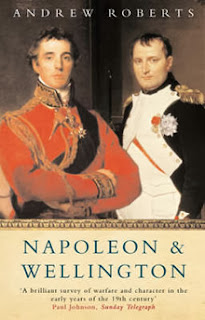 I read “Napoleon and Wellington “ by Andrew Roberts recently.
Roberts wrote an excellent biography of Lord Salisbury, the nineteenth century British Conservative Prime Minister , which I really enjoyed.
This book on Napoleon and Wellington is not quite as good.
It gives an outline of their respective military careers. Wellington and Napoleon only faced one another in battle once, at Waterloo. It is arguable that this battle was not as decisive as  it was presented as being, because France’s military strength had been sapped to a fatal degree long before , in the disastrous invasion of Russia, at Leipzig, and in constant warfare elsewhere.
Even if Wellington and Blucher had been defeated at Waterloo, and Napoleon had taken Brussels, he would not have destroyed their armies. And a vast coalition, including the Russians and the Austrians, was making ready to join the British and the Prussians against Napoleon. He would probably have met his Waterloo somewhere else, later in the year.
This book is less concerned with telling the story of these two fascinating careers, as it is with how the two, who never met, wrote about one another afterwards. This becomes a little tedious at times.
Napoleon, who wrongly blamed Wellington for the choice the most isolated island in the world for his exile, was increasingly critical of Wellington’s abilities as a soldier, and he demonstrated deep animosity when left money  in his will to a man called Cantillon, who had attempted to assassinate Wellington.
Wellington collected Napoleonic memorabilia, and took up with several of Napoleon’s former mistresses,  but  he was privately disparaging of Napoleon’s generalship, especially after he had learned of the contents of Napoleons will!
Print Entry

ARE WE MISSING SOMETHING?