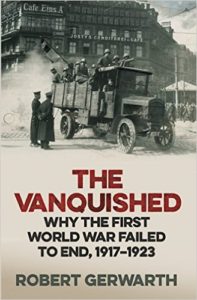 I strongly recommend “The Vanquished, Why the First World War failed to end 1917-1923” by Robert Gerwarth .

The book deals with the last year of the Great War, and with the many small wars it generated  that continued for another five years, including  one in Ireland.

Before the Great War, multi ethnic Empires operated relatively peacefully. While the Imperial  idea,  and  multi ethnicity, clashed with the ethnic nationalism that flourished in intellectual circles, the political arrangements worked and were adaptable.

Austro Hungary had a multi ethnic Parliament with representation from the minorities present. 23% of the Emperors subjects spoke German, 20% Hungarian, 16% Czech or Slovak, 10% Polish, 9% Serbo Croat,  8% Ukrainian, 6% Romanian and so on. All coexisted.

The Ottoman Empire, though Muslim, tolerated Christian and Jewish minorities.

The United Kingdom of Great Britain and Ireland may have been dominated by the English, but its Parliament had large Irish and Scottish representation.

The Russian Empire contained minorities too numerous to list.

The permissive consensus, that allowed these entities like these to resolve their internal differences by generally peaceful methods, was shattered by the sacrifices and brutality of the War.

It was a war that lasted far longer, and took far more lives, than anyone expected when it started.

It is a global tragedy that the gross over reaction of Austro Hungary to the assassination of Archduke Ferdinand in July 1914, started a conflict, with whose  consequences we still live today.

100 years later, the Brexit negotiations, the refugee crisis and the hangover of the financial crisis in Greece, Italy and some other countries will put immense stress on the bonds of tolerance that hold the European Union together.

They will from time to time bring to the surface buried tensions and resentments between European nations that date back to events of the 1917-1923 period which are so brilliantly described in this book.

Ministers and diplomats, attending fraught European meetings over the next few years, who want to understand where some of their colleagues from the other 26 countries are coming from, could profit from reading this book . It will help them understand where the, often unarticulated historical assumptions and fears come from, that may help explain behaviour that might otherwise seem unreasonable or disproportionate.

For example, the  present day fears in the Baltic States, of both Russia and Germany, date from events between 1917 to 1923.

So also can Russian fears of encirclement be traced back to the humiliating peace imposed on it by Germany in 1918, and to the subsequent western interventions in its Civil War in the early 1920’s.

The authoritarian and nationalistic trends in Hungarian politics can be explained by the fact that the post War settlement was much harder on Hungary, even than it was on Imperial Germany. Large Hungarian speaking populations remain in neighbouring Serbia, Slovakia and Romania to this day.

In 1919,the First World War had left much of Europe starving and desolated. Order had  broke down. States were too weak to exercise their proper monopoly on the use of force.

Resentments abounded about the supposed injustice of the imposed peace settlements. Demobilised soldiers know no other trade than war.  Minorities, particularly the Jews, were scapegoated all over central Europe, for misfortunes for which they had no responsibility at all.  Bolshevism was seen as an imminent threat.

States and populations turned to paramilitary organisations to restore order, in these frightening circumstances,  and out of that understandable desire for order grew Fascism and the Nazis.

This is a well written book which deserves a wide readership.